BehaviorTree.CPP allows the creation of a Executor where the actual behavior trees are executed, whilst Groot is a graphical tool to help the Behavior Design to be more productive. The demonstration focuses on the integration of the SmartMDSD Toolchain, an Integrated Development Environment (IDE) for robotics software development conform-to RobMoSys, with Groot, a graphical user interface to edit behavior trees. The development of the behavior tree is based on the skills provided by a system that was modeled using the SmartMDSD Toolchain.

In the following video we can see the workflow from the perspective of the Behavior Developer: 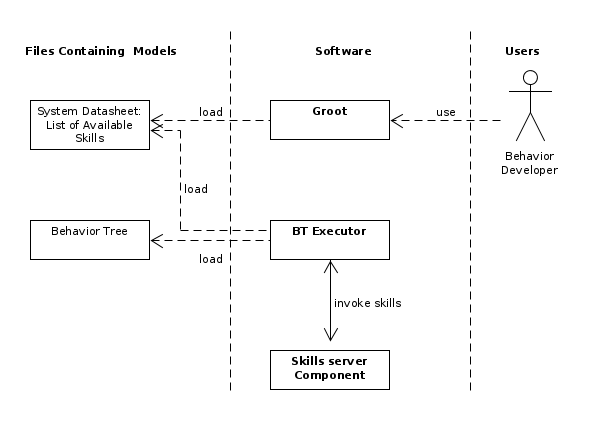 This process doesn’t require any code-generation nor compilation, since both the nodes and the trees are create programmatically at run-time. This workflow is shown in the following video.

Demonstration is in the Context of RobMoSys User-Stories

In the context of the RobMoSys technical user stories, this demonstration shows:

Based on an existing robotics application developed with the SmartMDSD Toolchain and the Skills that are provided by the application’s components, the Behavior Developer selects and composes actions and conditions to develop the behavior tree.

In the next diagram we can see how the different RobMoSys roles interact:

The picture below illustrates this workflow. Note how the different roles are supported by different tools in the RobMoSys ecosystem: Domain Expert, Component Supplier and System Builder are supported by the SmartMDSD Toolchain. The Behavior Developer is supported by Groot/BehaviorTree.CPP. 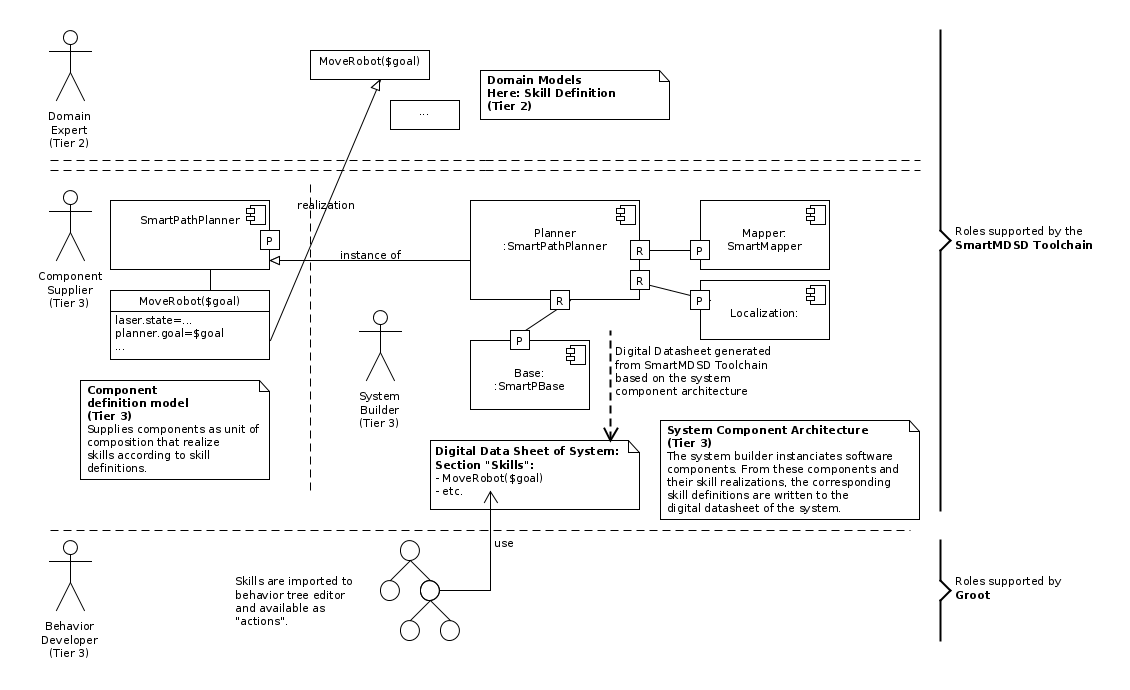 The below screenshot shows Groot in action while editing a behavior tree: 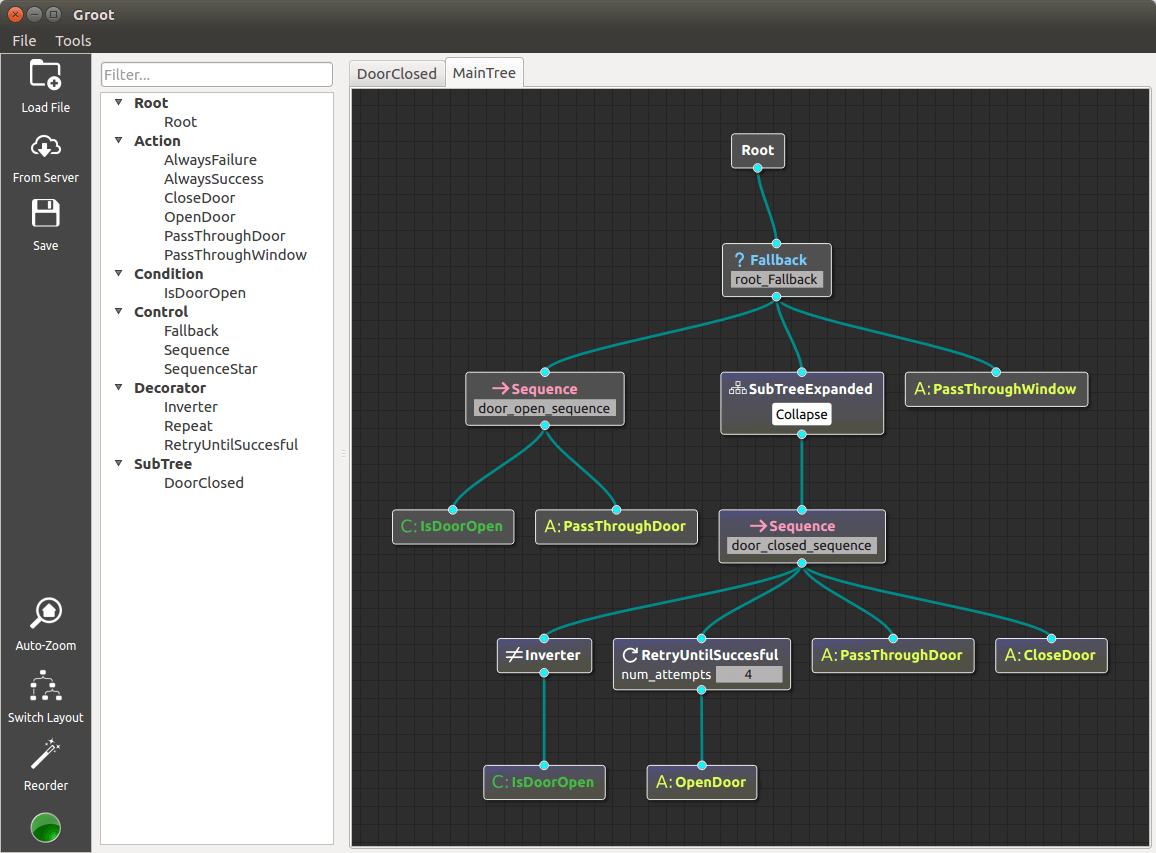 A previous version of this demonstration as of June 27 2018 focused on the technical feasibility of behavior trees communicating with components from the SmartMDSD Toolchain. At that time, it was manual effort by the system builder to “connect” the behavior engine with software components. This manual effort is now replaced by a full model-driven workflow and interaction between component supplier, system builder and behavior developer roles. 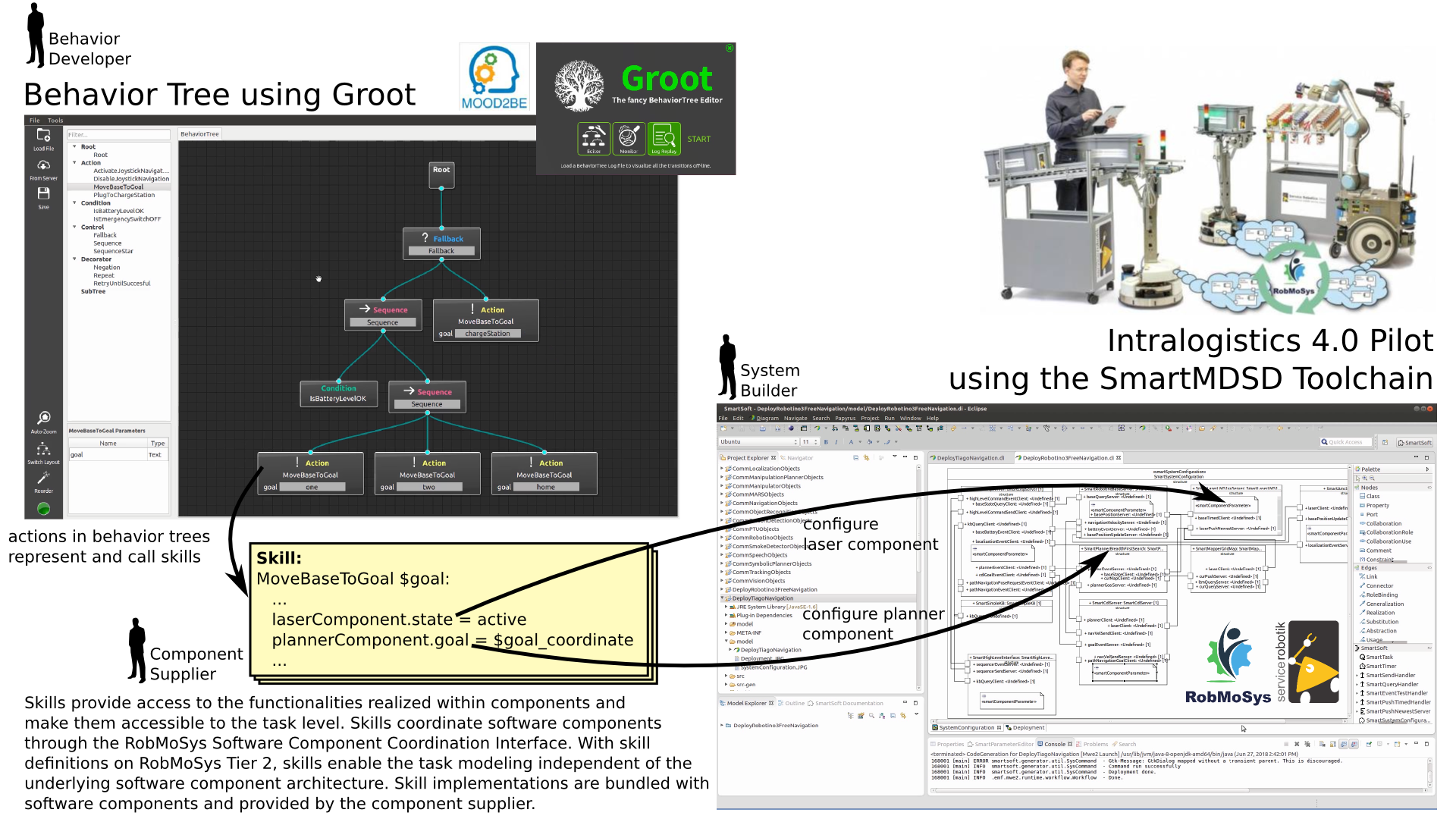 Skill Modeling by the SmartMDSD Toolchain

Skills are modeled by the Domain Expert role on Tier 2. The below screenshot shows the skill definition model in a Domain Model Project. 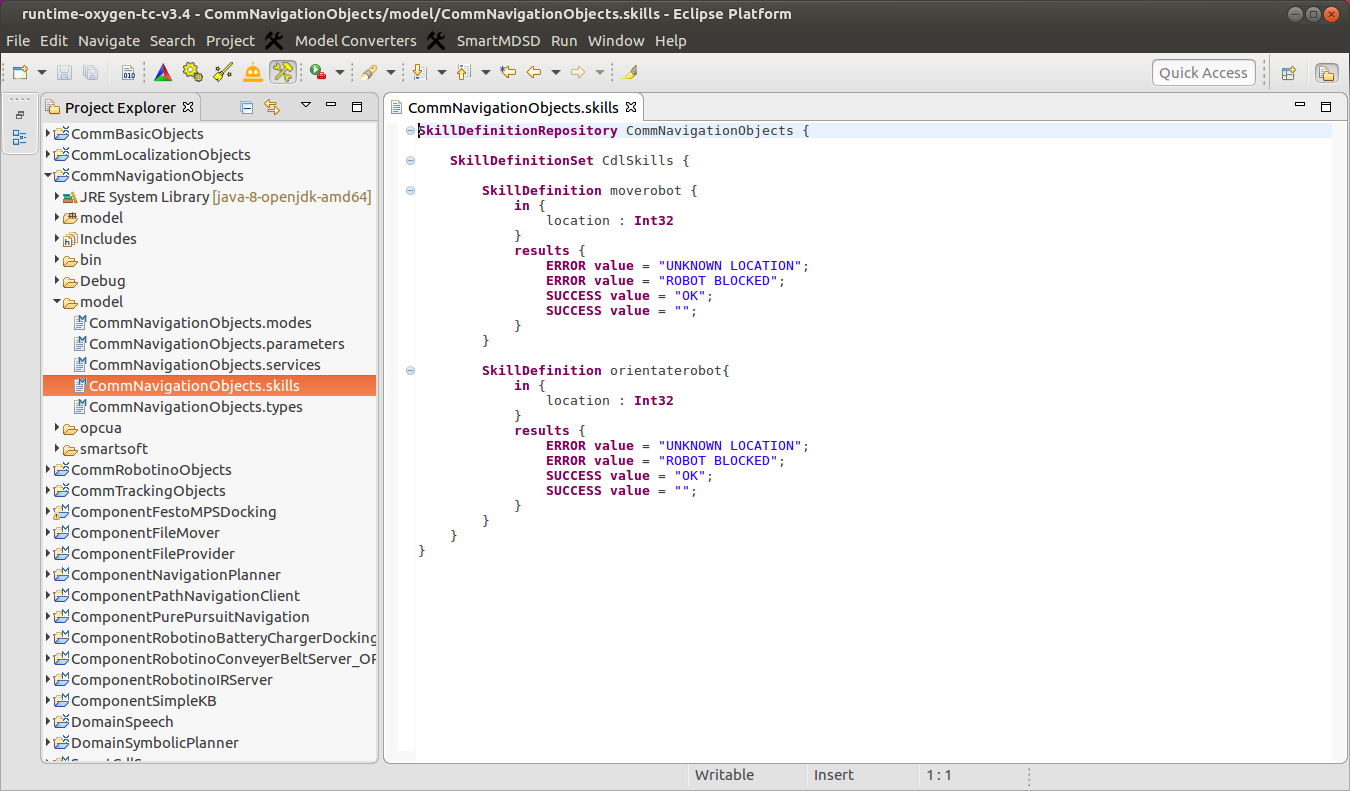 Skills are realized by software components. The below screenshot shows the skill realization as it is created by the Component Supplier role in a component project (Tier 3). 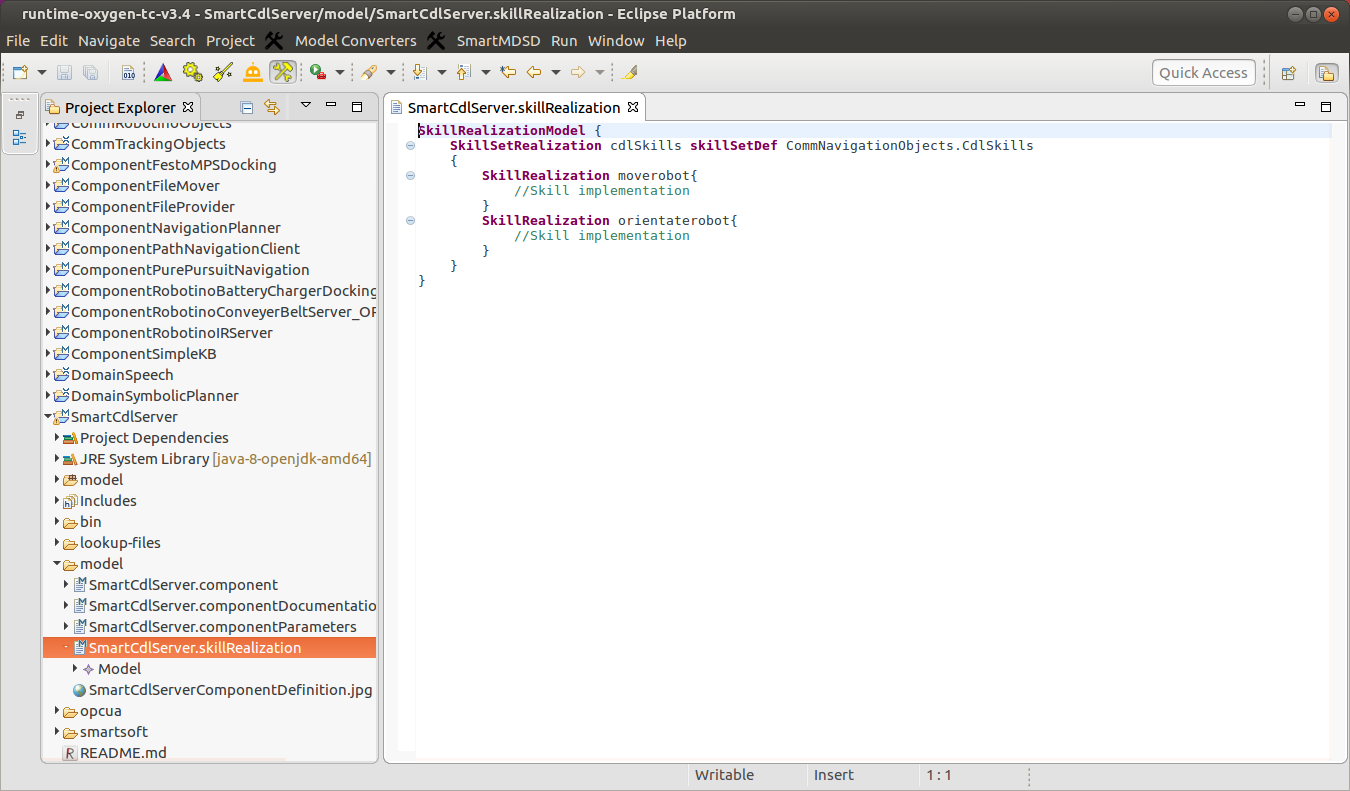 The figure included below shows a screenshot of the system component architecture diagram of the demonstration. It was modeled using the SmartMDSD Toolchain. The system was composed by the system builder from previously developed software components.

The modeled system comes with a digital data sheet (see project explorer on lower left). It lists the skills which come with the components of the system. This datasheet can be imported to Groot for use by the Behavior Developer. 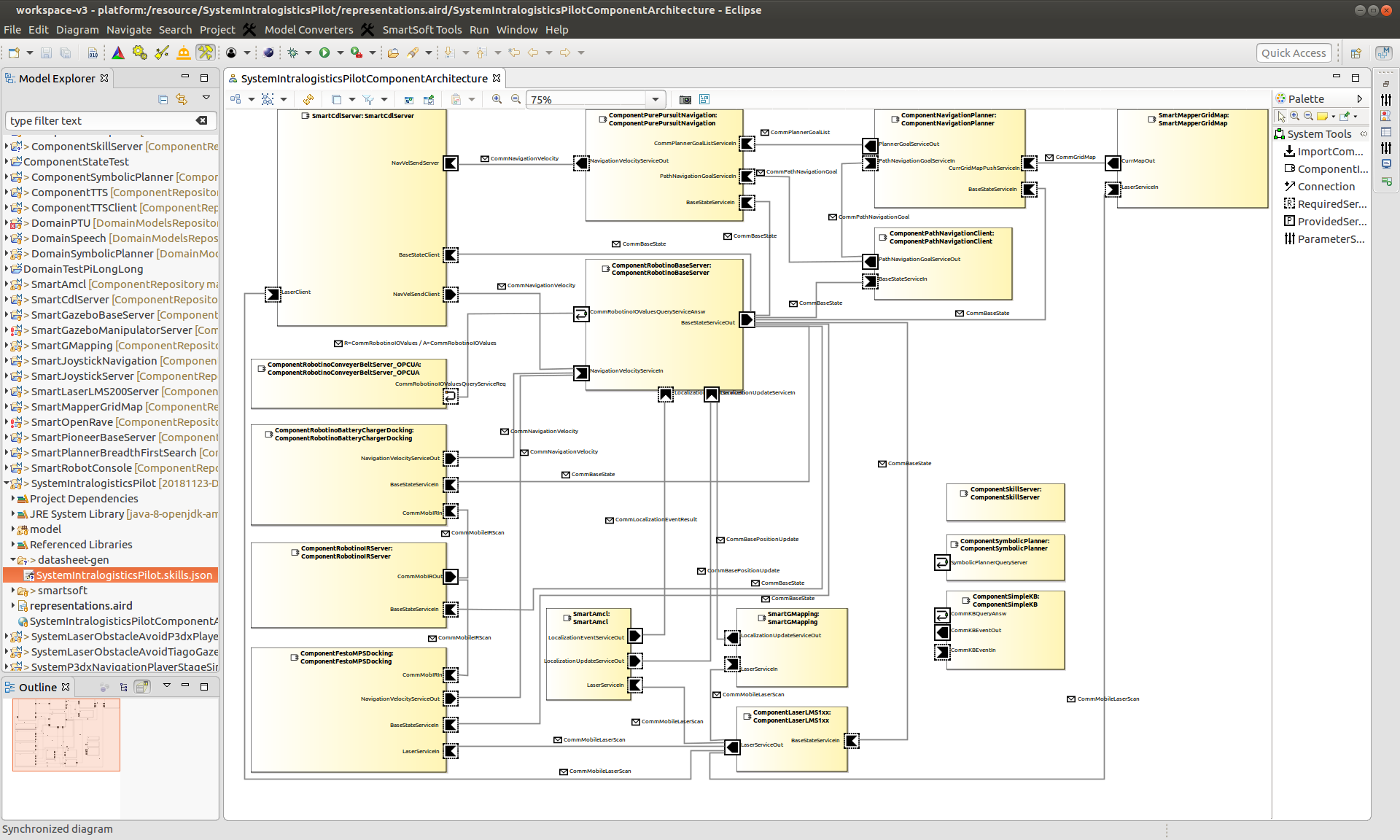 Both BehaviorTree.CPP and Groot are currently “feature complete”. These softwares include extensive documentation and unit tests; they have a good level of maturity and can be already used in real-world applications. In terms of community and dissemination, the code is available on Github and has an increasing number of users, which started contributing with bug reports, bug fixes and feature requests.

The additional goals for the rest of the MOOD2Be project (running till Feb. 2019)are:

Support of the behavior developer by the SmartMDSD Toolchain is ongoing work and available as a prototype which is expected for release soon:

To discuss this demonstration, see https://discourse.robmosys.eu/t/demonstration-of-behavior-trees-mood2be-smartmdsd-toolchain

Fur further information and to learn more about the concepts used here, see: