You are here: RobMoSys Wiki » Composition in an Ecosystem » Skills for Robotic Behavior
composition:skills:start

To allow for composition and to enable the separation of roles, robotics behavior blocks can be separated into different levels of abstraction: skill and task. While tasks describe how a robot does something in an abstract and independent manner, a skill provides access to functionalities realized by components for the usage within tasks. Skills therefore lift the level of abstraction from functional and service to a skill abstraction level, being usable from a task abstraction level for robotics behavior development.

The following sections describes the big picture how the separated roles will collaborate for robotics behavior development (see the following figure as well): 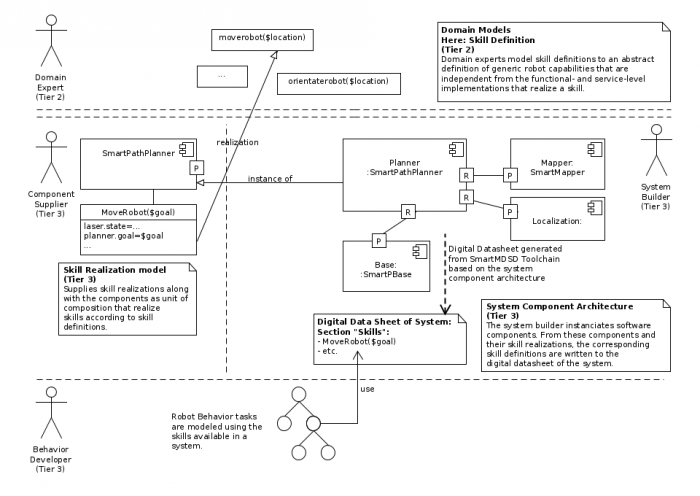 The role of the Robotics Behavior Developer is able to realize the behavior tasks (abstraction level) using the skill definitions as interface to the functionalities later provided by the components. In case the behavior is developed for a known system the list of available skills can be received from the system digital data sheet, provided by the role of the System Builder.

To make use of existing skills (see system digital data sheet), a task level behavior coordination approach can use existing skills via a run-time skill interface. This enables the usage of different behavior coordination approaches without the need to realize the skills (accessing the components, lifting the level of abstraction) over and over again.

An example realization of the interface can be seen within the software component “ComponentSkillInterface” and is accessible via a json based protocol. The interface is kept lightweight and by purpose without RobMoSys communication patterns in order to enable the simple integration with existing infrastructure. It is realized using plain sockets or zeromq JSON communication.

The protocol is straight forward and can be sketched as follows. For further details see the software component ComponentSkillInterface.