Support for the Flexible Navigation Stack

This page describes how the SmartMDSD Toolchain and the SmartSoft World supports the Flexible Navigation Stack.

As one of the further baselines in RobMoSys, the SmartSoft navigation components can be used with the PAL Robotics Tiago platform within the Gazebo simulation. It features PAL Robotics Tiago: see SmartGazeboBaseServer as virtual robot base. This example is available “ready-to-go” in the virtual machine image. A screenshot of the SmartMDSD Toolchain displaying the flexible navigation stack: 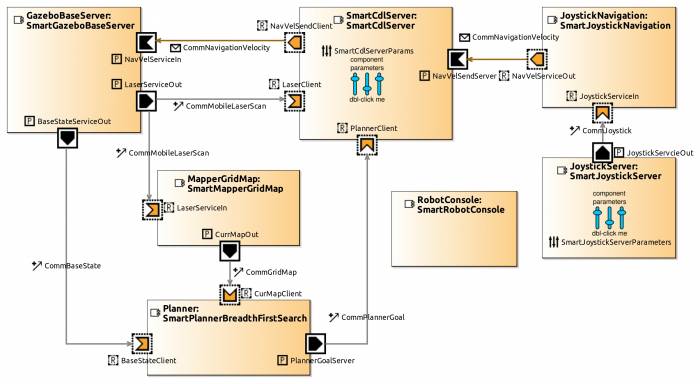 The SmartCdlServer component (see figure below) deserves some further explanations. In a nutshell, this component receives laser-scans and next goals (which can be either a position, velocity, orientation or even undefined). Based on these inputs, the internal CDL algorithm calculates a set of collision-free navigation-commands. Each of these navigation-commands is equally valid, the selection of one “appropriate” one is performed upon a configurable navigation-strategy. For example, one strategy might try to maximize the overall velocity, another might try to stay in the middle of a hallway, yet another strategy might try reaching the next goal closest possible (often the default strategy). This separation between the general obstacle-avoidance and the definition of different strategies adds flexibility with respect to applicability of this component in different scenarios. 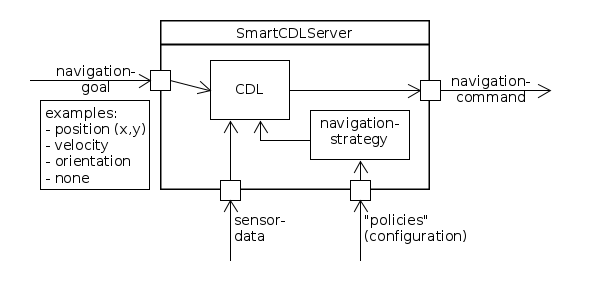 Note: all components and links in this section refer to the v2-generation of the SmartMDSD Toolchain:

Another application that uses this navigation stack in a structured and coordinated fleet environment using e.g. Robotino3 robots is described in the ETFA2016 paper2).