Support for Coordinating Activities and Life Cycle of Software Components

This page describes how the SmartMDSD Toolchain supports Coordinating Activities and Life Cycle of Software Components. 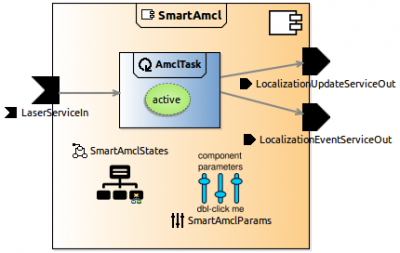 The two default operation modes “active” and “neutral” cover the majority of simple software components that provide a single service based on a single activity with a functional block. However, more complex components allow the definition of multiple provided services and several activities within a single component. For such cases, a more detailed model of the component's operation modes is required. 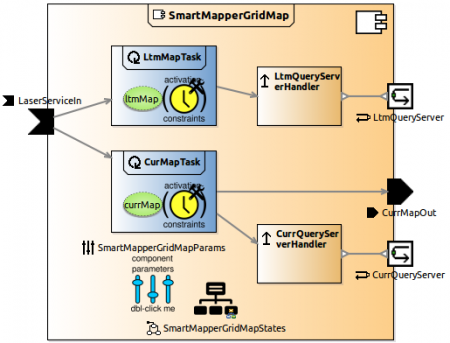 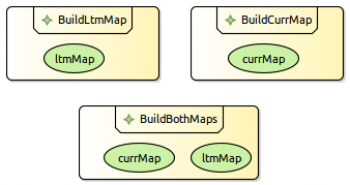 As an example for a more complex component, the figure above provides the model of the “SmartMapper” component. This component provides three services, namely “LtmQueryServer”, “CurrQueryServer” and “CurrMapOut”. The first service provides a long-term map while the other two services provide access to the current map (i.e., a grid-map of a local section from the long-term map). The component internally maintains and updates both map types. There are different situations at runtime, where either one of the map types is needed, or both map types are used, or none of the map types is currently needed. The model of the component's operation modes (see figure on the right) supports all these cases. As can be further seen in the component model (in the figure above) the “LtmMapTask” activity is only active if one of the operation modes “BuildLtmMap” or “BuildBothMaps” is active. Respectively, the “CurrMapTask” activity is only active if one of the operation modes “BuildCurrMap” or “BuildBothMaps” is active. Please note that the “neutral” operation mode is not explicitly modeled as it implicitly exists for every component by default.