The Platform Metamodel (see figure below) is one part of the overall RobMoSys Composition Structures. It defines the target platforms on the robot where the software components are later deployed to. The here described metamodel has no direct relation to the Digital Platform as described in the glossary. Please note that the current version of the Platform Metamodel is reduced to the most basic elements that are sufficient for deploying and executing software components. However, further versions of this metamodel might be extended to reveal additional details. 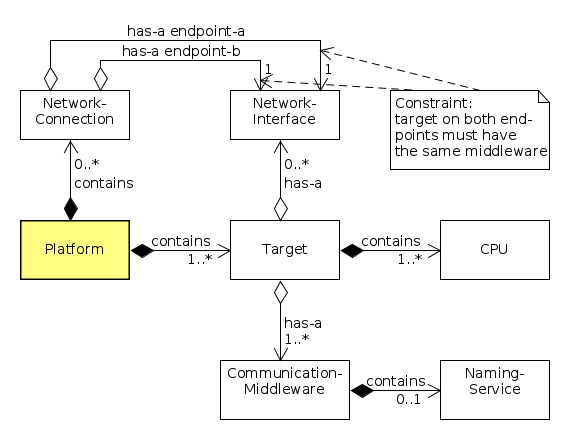 The two core elements of the platform meta-model are the targets and the network-connections. A target is basically a PC on the robot. Each target (i.e. a PC) has several CPUs and can have several network-interfaces. In addition, a target can use a specific communication-middleware (optionally with a middleware-specific naming-service). A network-connections links two network-interfaces and requires (as a constraint) that both connected targets use the same communication-interface (otherwise the components from the two targets would not be able to communicate).