In the context of human-robot collaboration, the operator interacts with the robot with no fences and influences the task execution. Thus, taking into account the context and more generally the environment for task definition is both mandatory and challenging at the modeling level. Human-robot collaboration raises also important safety requirements related to the robot, the tool, the task and the environment. Therefore, safety and more particularly risk assessment is a major feature that this pilot aims to realize for reducing risk occurence. The objective of this Pilot is to validate the RobMoSys methodology in the context of advanced manufacturing where humans and robots are working together in the same production site.

The pilot demonstrates task and environment definition for a human-robot collaboration use case: Pick and Place through RobMoSys tools. The interaction between the robot and the operator is direct (with no fences) for carrying a heavy object from a given starting position to a target one. 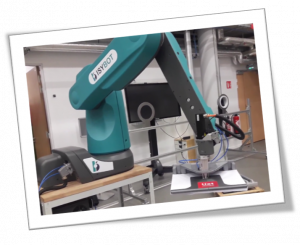 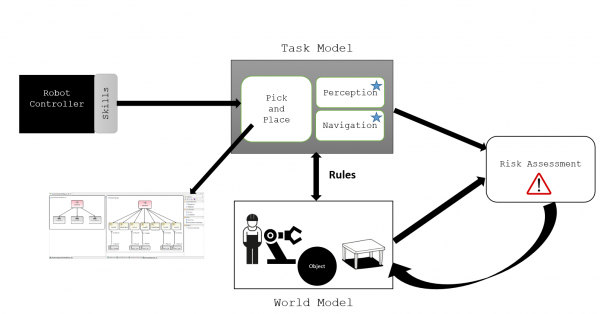 The gripper attached to the robot is used for grasping paper. We can replace this gripper with another one to manipulate other categories of objects. The operator interacts with the robot before task execution for teaching the task to the robot or during task execution for co-manipulation. This pilot will provide a basis that can be enriched with other functionalities in the second open call. A robot arm can be placed on a mobile base for example. A camera or other sensors can be added for object identification.

The development and deployment of the application can be done easily through a virtual machine that contains all the necessary tools, simulators, software, examples and documentation:

In order to run the demo, download the virtual machine »here« and follow the steps described in the README file.

The examples were built to show several aspects of RobMoSys related to task specification, world models and safety functionality.